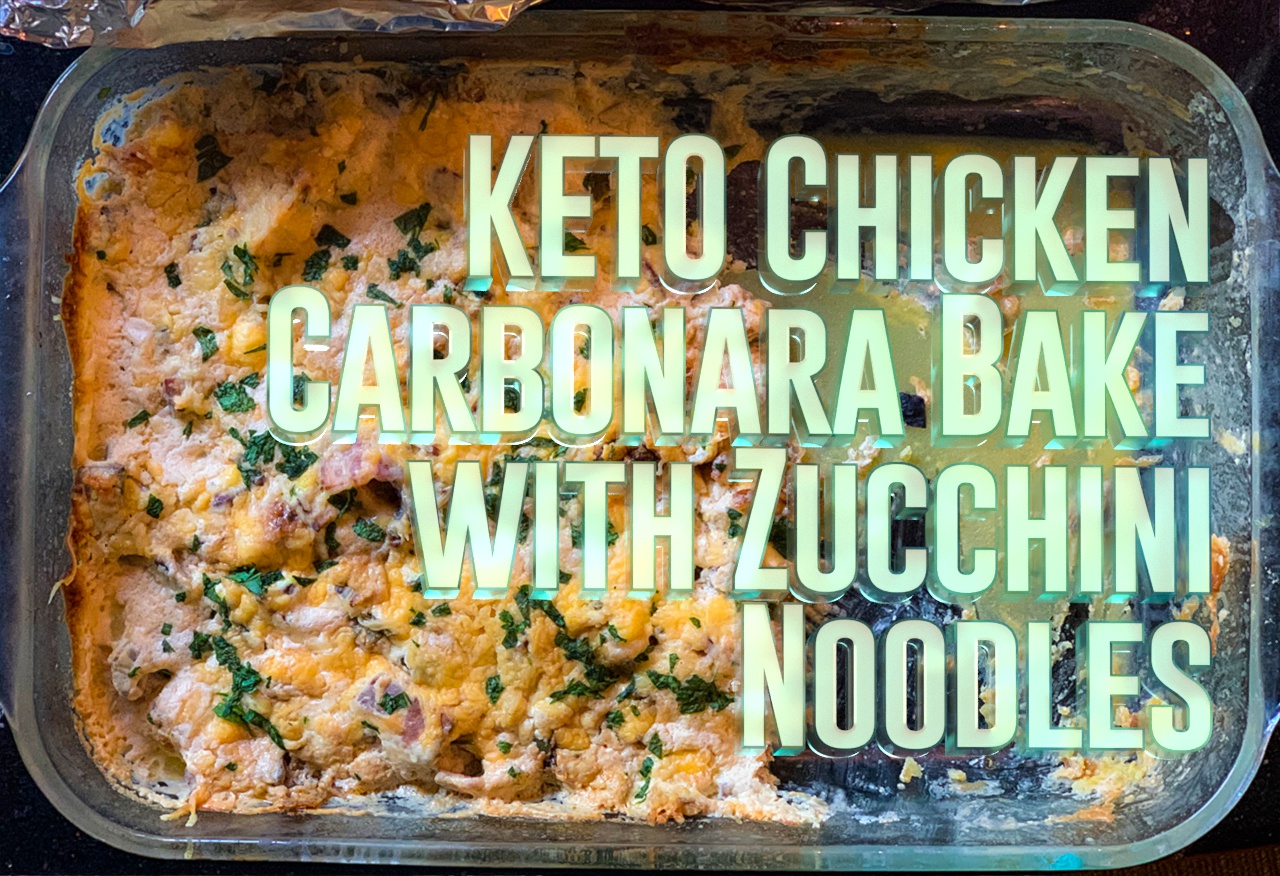 Posted at 12:48h in Blog, Recipes by JeffJag

This dish turned out amazing as you can see from how much we ate in the picture. I didn’t take one when it was hot because I’m just doing this for fun, friends. Anyway, there are quicker ways of doing this recipe, but it won’t develop as much flavor or taste as good. But if you’re looking for ways to simplify it, you can use pre-cooked bacon and chicken strips, or substitute a jar of Alfredo sauce instead of cooking the heavy cream with the cheese. I wouldn’t, but you could do that and it wouldn’t be terrible.

There’s also a bit of debate on whether caramelized onions fit in with Keto diets, so if that’s a concern for you, you can skip the onion, pepper, and mushroom mixture and instead put some onion powder and the chopped garlic in the sauce. This is how I made it and it turned out great. It was also a big hit with the kids, which is always a win since we don’t really have noodles in the house anymore.

Spray or coat 9 x 13” casserole dish with oil, set aside. I preheat the oven to 350℉ after caramelizing the onions, because that step takes about 30 minutes. You can also do the remaining chopping/prep during that cooking time so many of these steps overlap a bit.

Heat 2 Tbls butter in a frying pan over medium heat. Add 2 chopped medium yellow onions then top with salt and pepper. After onions have cooked to translucent, add 1 chopped bell pepper, and 1 cup of chopped mushrooms.  Toss to coat in butter. Cook until onions are brown, using splashes of water to release fond and steam the mixture as needed.  The last 1-2 minutes of cooking when everything is looking brown, stir in 2 Tsp finely chopped garlic. You don’t want to cook the garlic as much, just take the raw edge off. When finished, set aside the onion mixture in a bowl.

While the onions are cooking, spaghettify/shred 3 medium zucchinis into zoodles and lay out on paper towels to dry. Pat them with a towel if they are very wet. you can add them directly to the oiled casserole dish, or you can sauté them in butter in a skillet for 5-7 minutes first and then add them to the oiled casserole dish. I cooked mine but I don’t think it really matters.

Chop 5-6 slices of thick-cut bacon into quarter inch chunks. Add to skillet and cook somewhere between tender and crispy.  I prefer slightly crisp for the sauce in the next step. I usually bake the rest of the package on a tray with edges at 375 for 30 minutes. Save the rendered bacon drippings in a little mason jar and the cooked bacon in the fridge. You can use the bacon grease for any kind of cooking and the bacon for breakfasts that week. I don’t make bacon every week, but if you’re going to open a package of bacon for this recipe, you might as well cook the rest of it right away so it doesn’t spoil.

Pat dry and cut 2 large chicken breasts into 1” chunks and season with salt and pepper.  Add 1 Tablespoon of the rendered bacon grease to stock pot on medium-high heat. When oil is hot, add pieces of chicken to skillet one at a time leaving room for each to fry. Cook until browned on both sides or until chicken reaches internal temp of 165ºF. Remove cooked pieces to a bowl – you may need to work in batches. When all of the chicken is cooked, layer it above the zoodles in the casserole dish, then cover that with the caramelized onion mixture.  Sprinkle a half cup parmesan cheese over the top.

In the same stock pot you just cooked the chicken, turn off the heat and let the pan cool off a bit before the next step. The main goal is to make sure the pan isn’t too hot when you add the cream so it doesn’t get grainy, but you want to use all those bits in the bottom of the pan to add flavor to the sauce. When the pan is cooled enough, add in all of the cooked bacon bits plus 1 teaspoon additional bacon grease.  Pour in the heavy whipping cream, 1 cup shredded parmesan, and half block of cream cheese. Turn the heat back on to medium-low, and stir until the cream cheese and parmesan melt into the sauce and there are no lumps. Reduce the sauce 1-2 minutes after all the cheese melts.  You don’t want it to boil or burn, which will ruin the sauce, so keep an eye on the heat to avoid over-cooking it. Add salt, pepper to taste. Pour the sauce mixture over everything else in the casserole dish, spread with a spatula then top with the remaining half cup of parmesan cheese.

Bake at 350 for 35 minutes.  Let it cool for 5-10 minutes before serving.  Sprinkle fresh chopped parsley on top if you’re fancy. I am.